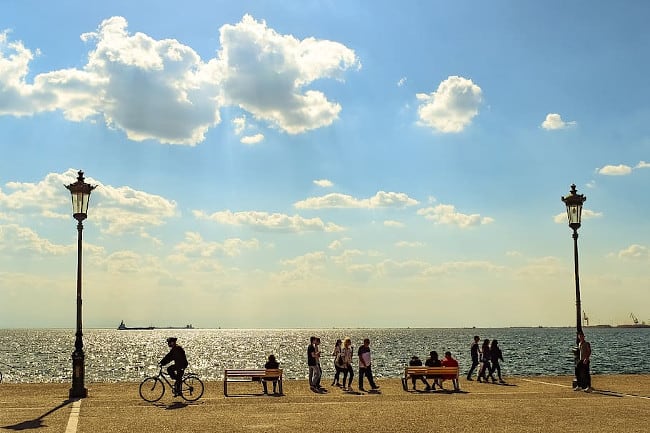 Thessaloniki is the second-largest city of Greece and the capital of Macedonia. With an international airport 17 km to the east, it is the ideal place to start your holiday in Northern Greece. Although it is a far better choice to explore the city centre on foot you will need to rent a car to discover the wider region.

Thessaloniki is a port city built on Thermaikos Gulf, facing Mount Olympus. The city centre has four central avenues (Nikis, Tsimiski, Egnatia, Agiou Dimitriou) parallel to the busy waterfront where the locals meet. The central squares of Aristotelous and Eleftherias face Nikis Avenue, the coastal road of the city that leads to the 15th century White Tower.

The White Tower is the landmark of Thessaloniki. There are two popular versions about the origin of the tower’s name. During the Ottoman rule, the tower was working as a prison. In 1890 a convict whitewashed the tower in exchange for his freedom. Therefore the tower took the name White. According to the other popular version, the whitewashing was a symbolic gesture of cleansing after the liberation of the city in 1912. Now, the White Tower is open to the public as a museum. Here visitors can learn about the history and culture of the region through permanent and temporary exhibitions.

A bit outside Thessaloniki city centre…

East of the city centre and next to the marina is the neighbourhood of Kalamariá. Kalamariá is famous for tavernas and restaurants. During the day you can enjoy your ouzo and delicious local dishes by the sea. If you prefer to dine after the evening, you should choose the area of Ladadika. Ladadika is closer to the centre and a better option for restaurants and bars at nighttime.

Our favourite place in Thessaloniki is Ano Poli. Specifically, Ano Poli means the North part of the city. It is also known as the old town. You will fall in love with the quiet neighbourhoods and cobbled streets. Walk past the Byzantine walls and enjoy the panoramic views of Thermaikos with the beautiful sunsets. In a word, Ano Poli is the perfect escape from the busy rhythm of the city centre.

The museums and other monuments of the city

While in the city, you should visit the Archaeological Museum. Namely, the museum hosts findings from archaeological excavations conducted in Thessaloniki and the broader area of Macedonia. Those findings cover a period from prehistoric times to the Roman years. Specifically, the two permanent exhibitions are the Gold of Macedon and Thessaloniki Area in Prehistory.

If you are interested in the Byzantine period, visit the Museum of Byzantine Culture. The permanent exhibition will travel you to the Byzantine years through thematic sections covering daily life, worship and burial customs. Moreover, you will learn about the architecture and art, along with commercial and business activity.

The Galerius Arch and Agia Sofia

Lastly, on Egnatia Avenue, you will find the Arch of Galerius. The triumphal arch built in honour of the Roman Emperor Galerius. Next, walk a bit further down to the beautiful church of Agia Sofia. The 8th-century cross-basilica style church is a World Heritage Site on the UNESCO lists.

Find out more about the exciting city of Thessaloniki here!