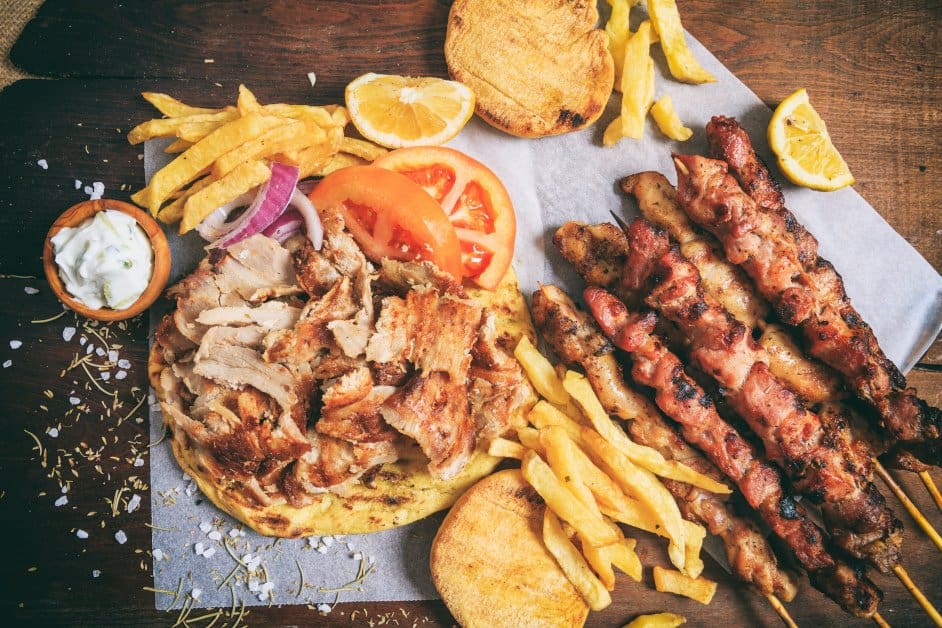 It is not a secret that Greek food is constantly gaining dedicated fans all over the world. Greek cuisine is so diverse, influenced by so many different cultures throughout its long history. And although every region has its unique signature dishes, there is one that is loved by every Greek all around the globe: Souvlaki, the king of Greek street food!

First of all, let’s talk about the name. You have probably heard several times the locals calling the dish in different ways, like souvlaki, gyros and kalamaki. Usually, it depends on the exact region you are in. In Athens and Southern Greece, souvlaki describes all the different types of the dish. By “kalamaki” (meaning small reed) they refer to the meat skewer and gyros is called the meat on the vertical rotisserie.

On the other hand, in the city of Thessaloniki and Northern Greece in general, by souvlakia, they refer to the meat skewers. You will never hear anyone in the region using the word kalamaki. There is a long dispute between the different areas, about who is using the correct names! But at the end of the day, does it matter? Whatever you call them, the fact is that they are plain delicious!

Now that we got the name issue straight let’s dig deeper into the different versions of the dish. As we mentioned above, the two main ones are the skewers and gyros. You can order the skewers by the item (served with white bread), in a pitta wrap (tylikto) or by the portion (usually contains 2-4 skewers). Similarly, you can order gyros in a pitta wrap or by the portion (merida in Greek). The portion usually consists of meat of your choice, pitta bread, fries, tzatziki, tomatoes and onions. Often you will find some restaurants serving the so-called skepasti. Skepasti is similar to a club sandwich (but with pittas instead of bread), with gyros, yellow cheese, tzatziki and vegetables. It is served with fries.

We specified the different versions of souvlaki, now it is time to deconstruct it!

The two most common types of meat used for the preparation of the gyros and the skewers are pork and chicken. A common variation of the chicken skewer is the kotobacon, i.e. chicken bites wrapped with bacon on a skewer. Other meats you could also find in some restaurants are lamb and rarely beef. The other types of meat, or meat preparation, that are quite common all over the country are the greek sausage (pork with herbs and spices), the bifteki (minced beef or mixed meat patty) and the kebab (minced lamb with spices).

If you are a vegan or vegetarian, don’t get discouraged! There is a variety of choice for you who want to taste the food that is so connected to the Greek culture! Most restaurants have a variety of choice to replace the meat, such as halloumi cheese, vegetable skewers (e.g. mushroom), falafel or you can order a wrap only with the extras, for which we are going to talk in detail further down.

The most common type of bread, favoured by the majority of the Greeks, is the Greek pitta. Pitta is a round flatbread and one of the main ingredients for the preparation of the wrap (tylikto). Pitta is also served instead of bread if you order a portion. Often, you will find two different sizes in pittas, normal and large. Another common practice among the locals is to ask for a dipitto (or else dikano), which is a single wrap with two pittas. In some restaurants, you can also find whole-grain pittas.

Other types of pittas, often used to prepare the wrap, are the Cypriot and the Arabic. The Cypriot pitta is a flatbread that opens in the middle like an envelope to put the stuffing in. The Arabic one is a thin wrap similar to the tortilla.

In Northern Greece, in addition to the pittas, they use white bread, and you can choose between pitta wraps and sandwiches. They also use the souvlouri (or koulouri), which is a bread similar to the traditional koulouri of Thessaloniki, a bagel type of bread with sesame.

The sauce is so important in the preparation of souvlaki. Without it, the food would feel very dry. The default sauce used in the wraps, or as an extra in the portions is the tzatziki. Tzatziki is a yogourt based sauce with garlic and cucumber. Traditionally, souvlakia were made with yogourt instead of tzatziki and in some places, i.e. Crete, it is still served the traditional way. Other sauces you can add instead of tzatziki is a mayo-based sauce that goes well with chicken. Second in popularity are two feta cheese-based spreads: tyrosalata and tyrokafteri (or else kopanisti) which is the spicy version of tyrosalata with hot pepper. If you are a vegan, you can ask for ketchup and mustard to accompany your wrap.

In Northern and Central Greece you will often find a variety of other sauces to choose from. Some of them are the Russian salad (white spread with potatoes, carrots and peas), the Budapest salad (white spread with ham), the coleslaw salad (kypourou), melitzanosalata (an aubergine based spread with garlic). Depending on the region you may find other sauces as well, for example in Corfu they use tomato sauce (or red sauce). It is not uncommon for some restaurants to make their own, signature sauce.

The final touch to make your souvlaki perfect is the extra vegetables. Traditionally the ones used for the preparation of the pitta-wraps are tomatoes and onions. Since many years ago, fries have been added as an extra. Several restaurants add roman lettuce to the chicken wraps and rarely to the pork ones. Occasionally you will find some restaurants that add some parsley too. As we mentioned above, if you are vegan or vegetarian, you can always order a wrap with just the extras.

Souvlaki is the king of street food and rightly so. It is cheap -a wrap usually costs around 2 to 2.5 euros- and it is plain delicious! You can find it anywhere, anytime and you can order it according to your taste and dietary needs. For all of us in Simplybook “Kali sas orexi”!

Next: How to order your souvlaki (with infographic)