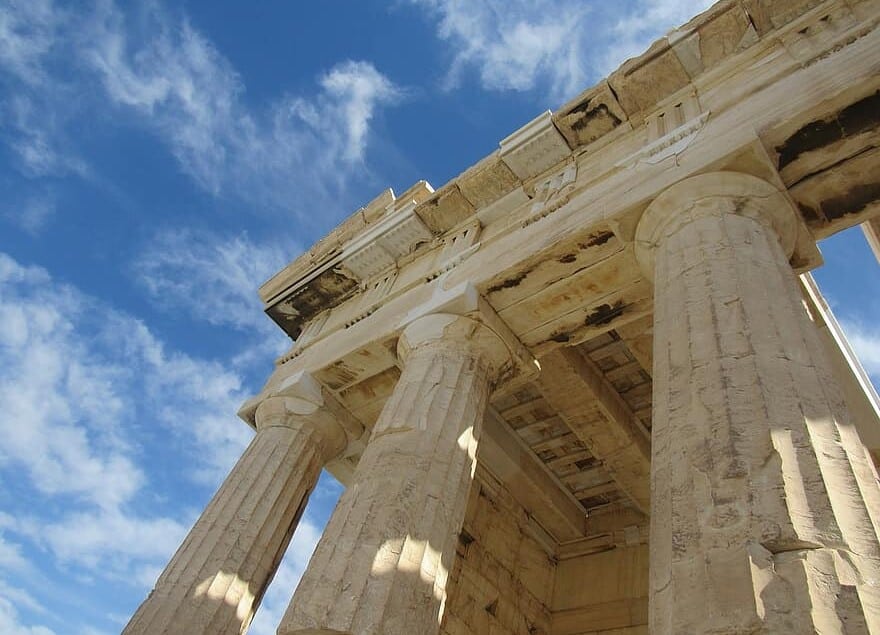 With so  many archaeological sites  in Greece, it is virtually impossible to find yourself in a holiday destination with no museums, ancient temples or excavation findings.  From the Acropolis, in the heart of Athens, to the city of Mycenae in Argos and the magical oracle of Delphi, the Greek mainland is and ideal place to travel back in history. An additional upside to visiting these areas is that the ancient Greeks knew where to build their cities and temples, chosing places of extreme natural beauty. At the same time, the actual presence of archaeological sites in Greece  has contibuted to the preservation of these natural areas.

Rent a car and drive back in time to the archaeological sites of Greece to discover the history,  the myhts, the architectural accomplishments and the artistic treasures of the ancient Greeks.

9 archaeological sites in Greece you should not miss

Acropolis, in the heart of Athens

Built during the Golden Age of Athens (460–430 BC) under the leadership of Pericles, the acropolis of Athens and its monuments are a widely known symbol of the Ancient Greece with thousands of visitors every year. The Parthenon, the temple of Athena, the patron goddess of the city of Athens and goddess of wisdom, stands at the center of the Acropolis. Next to the Parthenon is the temple known as the Erechtheum and the small temple of Athena Nike. At the south of the hill stands the Theatre of Dionysus and the Odeon of Herodes Atticus, housing the Athens Festival from May through October each year.

Want to discover more about archaeological sites around Athens? Rent a car and take the Simplybook Athens Day Trip to the Coast and Beaches of Attica.

In the area of Vergina lies the archaeological site of Aigai, the first capital of the Kingdom of Macedonia where Alexander the Great was proclaimed king. Archaeological evidence shows that the area has been continuously inhabited from the Early Bronze Age, becoming an important cultural center during the the Early Iron Age and reaching its peak during the Classical periods (5th-4th centuries) under the Macedonian kings.

The site consists of an acropolis, shrines, and the royal palace, said to be visible from the whole Macedonian basin during the reign of Alexander’s father, Philip II. Of great historical and archaeological value is the ancient burial ground discovered in the area with many rich tombs including the tumulus of Philip II.

The finds from the excavations are exhibited in a protective shelter at the archaeological site as well as the Archaeological Museum of Thessaloniki. The local museum currently houses Philip’s tomb while a new museum is being constructed for the palace and other important finds.

If you rent a car in Thessaloniki it will take you around on hour  (70 km) to get to Vergina via A1 and Egnatia Odos/A2/E90.

View of the Monasteries and rocks of Meteora. Photo by Giuseppe Milo, licensed

Meteora is Greek for “suspended in the air”. This is the name chosen to describe this unique formation of the sky high monoliths located in the Western region of Thessaly.

Formed around 60 million years ago during the Paleogene period, these rocks with a mean altitude of 300 meters provided the isolation needed by an ascetic group of hermit monks who inhabited Meteora in the 9th century AD. Starting around the late 11th century an ascetic community was created in Meteora, around the church of Theotokos. The great Monastery was founded during the 14th century followed by around 20 more where monks found the ideal refuge from Turkish raiders in the area.

Today six of the monasteries are still active, four inhabited by men, and two by women. Visiting hours of the monasteries vary between 9 a.m. – 5p.m. so do take this under consideration when planning. There is a dress code for visits to the monasteries. Ladies are required to wear skirts and gentlemen should wear long trousers.

If you rent a car in Athens it will take you a bit more than 4 hours (357 km) to get to Meteora via highway E75 until Lamia and then turn at the exit to Lamia.  From here head towards Karditsa, Trikala and Kalampaka, only a few minutes away from Meteora. If you rent a car in Thessaloniki your drive will last a bit less than 3 hours (228 km) via Egnatia Odos/A2/E90 through Veria, Kozani and Grevena. You can also stop on your way to visit Vergina, 11 km southeast of Veria or 85 km southwest of Thessaloniki.

The ancient sanctuary of Delphi, at the south-western slope of Mount Parnassus was considered by ancient Greeks as the navel (or center) of the world. It is here where Pythia, the Delphic oracle gave prophecies to Apollo’s worshipers, influencing the history of Greece, according to Greek mythology. Today Delphi is one of the most impressive archaeological sites in Greece.

Visit the ruins of the 4th century BC Temple of Delphi, the reconstructed Treasury of Athens, built to commemorate their victory at the Battle of Marathon, the theater and mountain-top stadium, all in a dramatic natural scenery where Greeks chose to build this sacred site. The Delphi Archaeological Museum adjacent to the archaeological site houses statues including the famous Charioteer, the Sphinx of Naxos, and impressive findings such as the friezes of the Siphnian Treasury, covering over a thousand years, from the Mycenaean era to the Greco-Roman times.

If you rent a car in Athens it will take you around two and a half hours (180 km) to drive to Delphi via the  Athens – Lamia  (E75) highway and turn towards Livadia and Arachova, only 10 km from Delphi. From Arachova you can easily follow the signs.

30 km north of Kalamata are the remains of the ancient city of Messene, one of the largest and best preserved archaeological sites in Greece and the economic, social, religious and cultural centre of the Messenians. Today the visitors can admire religious and public buildings such as the theater, the agora, the stadium, the gymnasium which was later converted into a Roman arena, the Asclepieion and the temples of Zeus and Poseidon. The city is protected by strong fortification walls with towers and gates.

Mystras, at the slopes of mountain Taygetos, 6 km northwest of Sparta

6 km northwest of Sparta, at the slopes of mountain Taygetos, is the fortified town of Mystras, the capital of the Byzantine Despotate of the Morea in the 14th and 15th century. Park your car before the entrance and allow a few hours to visit the Byzantine churches with the impressive frescoes and architecture including the archaeological museum housed in the cathedral of Agios Dimitrios. The site also offers beautiful views of Evrotas valley and the surrounding pine trees and cypresses.

When in Helia, make sure that you allow yourself some time to visit one of the most important archaeological sites in Greece, the birthplace of the Olympic Games. Olympia is 19 km east of Pyrgos and receives thousands of visitors from all over the world. This ancient site used to host the Olympic Games, organized every four years in honor of Zeus, the father of Gods.

Visit the stadium where the runners used to compete, the temple of Hera in front of which the Olympic Flame is lit today, the temple of Zeus where the gigantic ivory and gold statue of Zeus used to stand. The history of this religious and athletic site is presented in the museum which houses finds from the prehistoric times to the Early Christian period: the richest bronze collection worldwide, the sculpted decoration of the temple of Zeus, the statue of Nike by Paionios and the Hermes of Praxiteles holding the infant Dionysos.

41 km east of Argos is Ancient Epidaurus with the Asklipieio sanctuary, still visited by thousands of locals and tourists every year. This archaeological site is mostly known for the well preserved ancient theater dating back to the 4th century BC, hosting today the annual Epidaurus festival with unforgettable performances. Due to the excellent acoustics the actors can be heard perfectly by all 14.000 spectators.

The ancient city of Myceneae, 14 km north of Argos

Last but not least in our list of archaeological sites in Greece is the ancient city of Myceneae. This was  the center of the Mycenaean civilization which dominated the eastern Mediterranean world from the 15th to the 12th century B.C.  It was the kingdom of the legendary king Agamemnon, leader of the Greeks in the Trojan War. Visit the fortified acropolis with the Cyclopean walls, the impressive Lion Gate, the Treasury of Atreus and the museum with the anthropomorphic ceramic figurines and the fresco with the female figures.