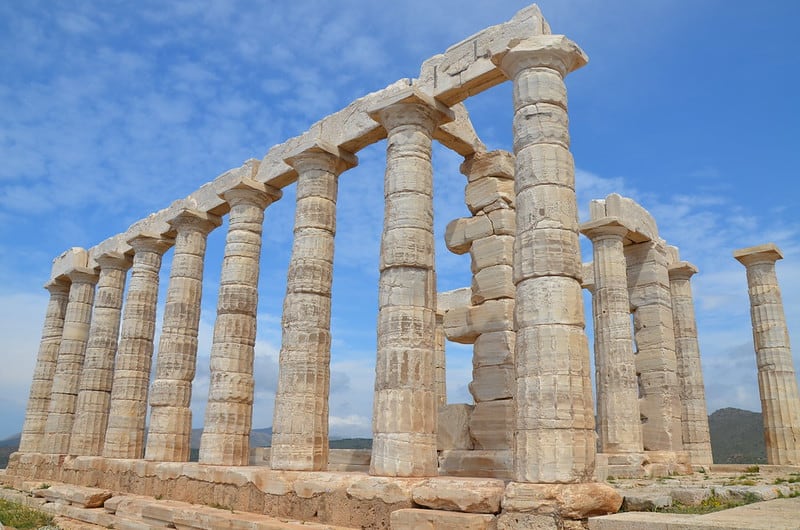 This Athens day trip is for those who enjoy driving and want to make the most of a destination. It is ideal if you are on your way or back from the islands and only have a couple of days to dedicate to this area. Rent a car in Athens, the heart of the Attica peninsula, and set off to discover the beautiful Aegean coast.

Our Athens day trip will first take you to the historical area of Marathon and the artificial lake. Then you will continue to the sandy beach of Schinias and the port of Rafina. Next, you will visit the temple of Poseidon in Sounio to admire the sunset. The end of your trip will be at Flisvos park where the Athenians meet on the hot summer nights.

The first stop of our Athens Day Trip is the historical area of Marathonas. From Athens take the National Highway E75 and follow the exit towards Marathonas. From this site, the Athenian soldier Feidipidis run to Athens to announce the victory of the Greeks over the invading Persian army. Here you can find the of Marathon Tomb, a monument to honour the Athenian soldiers who fell in the battlefield. In the meantime, you can visit the small Archaeological Museum exposing pottery and statues of the Neolithic and Early Cycladic era.

While in Marathonas it is worth to pay a visit to the artificial lake. The construction of the lake in 1931 was a consequence of the growing need of the capital for water supplies. In brief, the Greco-Turkish war (1919-1922) resulted in a rapid population increase by refugees fleeing Minor Asia. An interesting fact about the lake is that the marble used for the dam cladding is from the Mount Pedeli, also used to build the Parthenon of the Acropolis in the 5th century BC. Since 1951 most of the water supply of Athens comes from other areas, as the Marathon lake could not cover the current population demands for more than a few days. Today Marathon Lake is one of the last ten remaining wetlands of Attica and an important one for the inhabitant water birds.

The beach of Schinias and the coastal pine forest are of high ecological value, a small paradise close to Athens. Here is where the Athenians choose to spend their weekends. The shallow and warm waters of Schinias are perfect for a swim even early in the season. Thus, do not hesitate to go for a swim in spring! During the hot summer days, the shade from the pine forest is ideal for a midday siesta, especially after a meal at the seafront tavernas. Moreover, the beach is long enough to allow for several beach activities, sports and beach bars for the young, as well as more quiet areas for relaxing on the Aegean coast.

Our next stop is the port of Rafina, 20 km south of Schinias. Closer to the Cyclades and Eleftherios Venizelos airport, Rafina is the second port of Attica after Piraeus. Here you can take one of the frequent ferries to the islands of Mykonos, Paros, Tinos and Andros. Rafina is also a popular destination for ouzo and seafood by the sea! Thus we recommend the area to enjoy your lunch after a swim in Schinias. Besides, the waterfront with the seaside tavernas gives the impression of being on a Greek island, without leaving the mainland.

Next stop is Cape Sounio in the most southern tip of Attica peninsula. This strategic point overlooks the entrance to Attica and the coast of Athens by the Aegean Sea. Consequently, the ancient Athenians built here a temple to honour Poseidon, the Greek God of Sea. The temple stands still nowadays and attracts many visitors from around the world. Here, the king of Athens Aegeus kept waiting for his son Thisseas who was in a mission to kill the Minotaur in Crete. The legend has it that the sailors forgot to replace the black sails with white ones to signal the victory of Thisseas. Aegeus -who saw the ship with the black sails approaching- thought his son was dead and jumped into the sea. Therefore, the tragic death of the Athenian king gave the name to the Aegean Sea.

Keep in my mind that you might find traffic on your way back to Athens, especially on Sundays when the locals return to the city from the weekend break. The best option is to stay here past the traffic time on Saturday and Sunday. However, the sunset from the temple of Poseidon is majestic and the best you can enjoy in Attica so you shouldn’t rush anyway!

Do you want to know what the Athenians do in the hot summer nights? On your way back from Sounio to the city centre is the last stop of this Athens Day Trip. In the neighbourhood of Palaio Faliro is the park and promenade of Flisvos. Flisvos is a popular meeting point for the Athenians during summer. You can either go there to exercise, walk your dog or relax by the sea. Alternatively, you can choose one of the numerous bars and restaurants on the side of the marina. Also, an ideal place for families where the children can play in the playground, often until past their bedtime! Flisvos is an example of a public park ideal for visitors who want to blend in with the locals. If you are lucky enough, you might get there during one of the cultural events organised by the local municipality. If you want to learn more read Celeste’s post about Flisvos park

To get there, follow the coastal avenue of Athens for about one hour (57km) with night views of the Saronic Gulf. It might seem like a long ride at the end of a long day, but on the other hand, you are only 9 km away from the city centre.