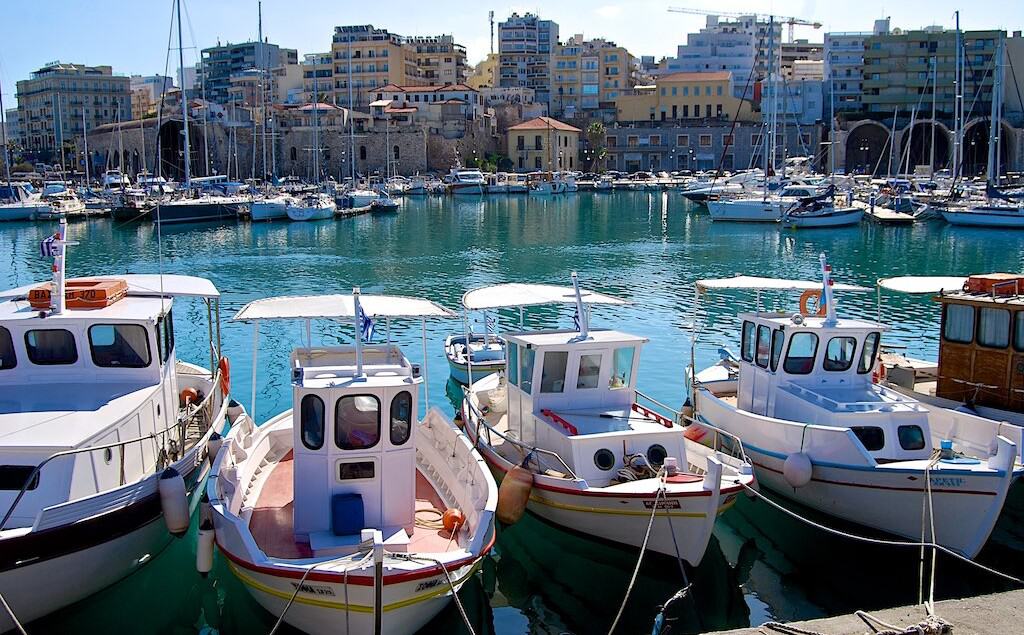 In the centre of the island of Crete is the region of Heraklion, where lies the capital of the island. Go back to the Minoan era at the Palaces of Knossos and Phaestos. Travel back to recent years at the mountainous traditional villages. Rent a car and drive from the city in the north coast, through the olive grove valleys and vineyards, towards the more quiet south.

Heraklion, the capital of Crete

80 km from Rethymno and 60 from Agios Nikolaos, Heraklion is the capital of Crete and the fifth-largest city in Greece. Hence, driving in the city can be a bit overwhelming so we suggest that you walk around the city centre and rent a car to discover the rest of the region. Besides, the pedestrian streets in the town centre will lead you to several historic landmarks such as the Morosini fountain (lion fountain) while you will get a taste of the everyday life of the locals. The Archaeological Museum houses an extensive Minoan collection and artefacts from all the periods of Cretan prehistory and history. Additionally, the Historical Museum will take you through the byzantine, Venetian and Ottoman period while the Natural History Museum with the gigantic Deinotherium will take you back to 9 million years ago.

Rent a car with Simplybook and discover our top 5 destinations in Heraklion!

Probably the most visited destinations in Heraklion, Knossos is the most famous archaeological attraction of Crete and the largest of the preserved Minoan palatial centres. Center of the Minoan civilization, home of the mythical king Minos, the size and shape of the palace gave birth to the myth of the labyrinth where the Minotaur lived. Discover more about the Minoan Palace of Knossos.

In Phaistos lie the ruins of one of the most important centres of the Minoan civilization. There, Luigi Pernier discovered the Phaistos disk in 1908. Visit the remains of the old and the new palace and enjoy the views of the Messara Plain and Psiloritis mountain.

Lentas is a quiet coastal village ideal for those who want to rest, relax and swim in the Libyan sea. In addition, Lentas can be your base for nearby beaches like Dikos to the west, Loutra and Tripiti to the east. Once you get there ask the locals for directions.

65 km southeast of Heraklion, at the foot of Mount Dikti, is the historical village of Viannos. There, a war memorial reveals the tragic history of the area. During the WWII the Nazis executed 820 inhabitants in Viannos and nearby villages. Despite its dramatic past, Viannos is a beautiful traditional village with narrow alleys and old houses. There you can find several tavernas and accommodation with great views of the olive groves.

11 km southwest of Phaistos, in the Bay of Messara, is the coastal village of Matala. Widely famous from the 1960s and early 1970s as a place of gathering for hippies who lived in the carved caves, the former Roman tombs. The peaceful Matala nights are also mentioned in Johny Mitchel’s song “Carey” after spending there some time herself. The laid back atmosphere, the beautiful sandy beach and the clear waters of the Libyan sea still attract many visitors.

Want to discover more of Crete?

Rent a car with Simplybook and go on a road trip on the Grand Tour of Crete.