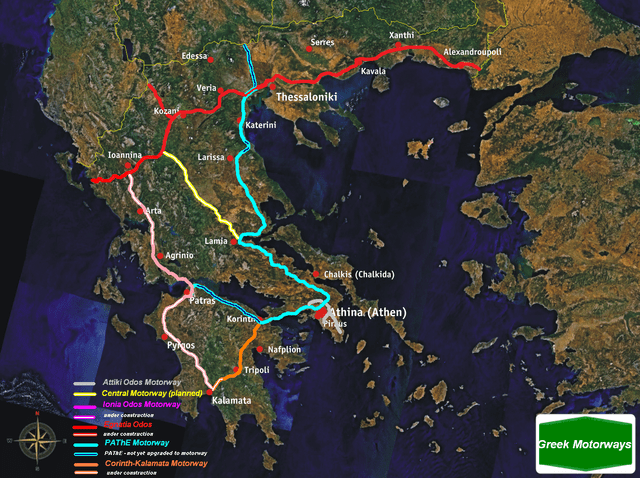 The Greek road network covers about 2,500 kilometres in total, in the mainland and Crete. Most visitors who prefer to rent a car and spend their holiday in the sunny islands may be used to small asphalted or dirt roads. However, if you are serious about travelling in Greece by car, you should know that there is a constantly improving network of motorways, national roads and highways that connect the different areas of the mainland and the regions of Crete. Hire a car and drive to the most unforgettable places, through mountains and coasts, and visit the inviting towns and villages to enjoy the Greek landscape.

The backbone of the Greek Road Network consists of the following motorways:

Attiki Odos is the 65 km urban-periurban motorway around the greater area of Athens and the backbone of the road network of the entire Attica region. It also connects the Patra – Athens (A8) with the Athens – Thessaloniki motorway.  The auxiliary routes, the Aigaleo Beltway (A65) and the Hymettus Beltway (A64) serve parts of western and eastern Athens respectively, while the A62 section leads from the main route to the Athens International Airport Eleftherios Venizelos. Attiki Odos is planned to cover more areas in the future years. Taking Attiki Odos  to drive to the suburbs of Athens  will make your driving in the busy capital much easier.

The  Athens-Thessaloniki motorway connects the Greek mainland on a North-South axis. A1 starts from  Faliro, a few kilometres from the port of Piraeus and exits Greece at Evzoni, at the border with the Republic of North Macedonia,  where it continues as the M-1.  From Athens and Attica, the motorway follows the Aegean coast passing close by the cities of  Lamia, Volos and Larissa, through the valley of Tempi between mountains Olympus and Ossa. It continues to Thessaloniki through Polykastro and up to the borders in Evzoni. Its total length is approximately 550 km. Most parts are easy to drive in, however you will need to be more careful at the valley of Tempi and Maliakos Bay which are still under construction, especially during wintertime. From Athens, it is connected with the A8 Athens-Patra which is 224 km long.

Egnatia Odos, a quite recent addition to the Greek road network, connects Northern Greece on a West-East axis. Starting at the port of Igoumenitsa and ending at the Turkish border in Evros, Α2 connects the cities of  Igoumenitsa – Ioannina – Metsovo – Grevena – Kozani – Veria – Thessaloniki – Kavala – Xanthi – Komotini and Alexandroupoli. Its total length is  670 kilometres. From A2 there are also auxiliary routes to  Albania and Bulgaria.

Olympia Odos is the motorway connecting Athens to southwestern Peloponnese. It begins in the area of Elefsina in  the region of Attica  and follows the Gulf of Corinth to the Rio–Antirio bridge, to the city of Patra. From here it continues along the Ionian Sea coastline, down to Pyrgos and the area close to Olympia, the ancient city of the Olympic Games. In 2008 the motorway went under construction to widen the road. Also, new tunnels and bridges were built. It was complete in 2017.

A6 is fully operational since August 2017. The route passes through most of western continental Greece, along the Ionian Sea, hence its name “Ionia Odos”. It starts from Ioannina at the A2 (Egnatia Odos) interchange, and ends at Rio, in Patras, through the Rio-Antirrio bridge. There, it connects to the A8 (Olympia Odos) motorway. Ionia Odos connects some of the biggest cities and towns of western Greece, like Ioannina, Preveza, Arta, Agrinio and Messolonghi.

Moreas is the Eastern Peloponnese motorway. It starts from Corinth, passes through Tripoli and ends at Kalamata. Its total length is 205 kilometres and has recently undergone extensive improvement to full motorway standards. The construction of A7 contributed to the reduction of the travelling time from Athens to Kalamata in half.